It’s midday in the foothills of Georgia’s Caucasus Mountains. Green slopes thin out into alpine meadows and below, a broad beautiful valley uncurls with row upon row of golden vineyards. Considered by many to be the birthplace of wine, more than 500 indigenous grape varieties are cultivated here.

Georgia has been making wine for 8000 years - it is a matter of pride, a symbol of hospitality and deeply rooted in Georgian national identity.

Georgian wine is still produced using the unique and traditional style of qvevri. Made of red clay, the enormous vessels are shaped like vases with wide shoulders tapering down towards a pointed bottom. Harvesting, or Rtveli, is done in autumn. The pressed grapes are put into the qvevri which are buried beneath the ground with only their necks protruding. No chemicals or yeast are added. When the cover of a qvevri is finally prised from its airtight seal, a sweet aroma will fill the air and your first sip will taste of butterscotch, as bright as the morning sun.

Nothing tells you more about the spirit and culture of a country than its food and wine - and Georgia’s is among the best in the world. Eating and drinking is always a celebration with the banquet or Supra at the heart of Georgian life. Whenever it takes place, a tamada, or toastmaster, will be selected to officiate - you have to be eloquent, funny and able to hold your drink.

With influences from both eastern and western food and cooking styles, each historical province has its own distinct culinary tradition. While meat plays an important part in Georgian cuisine, close attention is also paid to the locally produced salads, vegetables, fruit and greens. 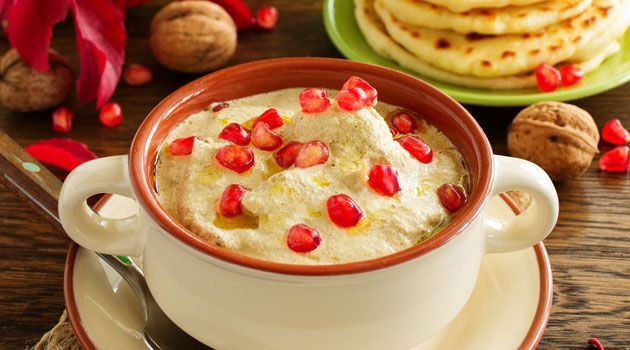 Some of the traditional dishes include:

Pkhaleuli - Vegetarian dishes from a variety of spiced plants usually with a walnut paste base.

Satsivi - Chicken or Turkey in a walnut sauce with garlic and spices.

Khinkali - The Georgian National dish: juicy meat dumplings made to be eaten by hand. Visitors end up craving this so much they make special trips back just to taste it again.

Tkemali - Georgian ketchup, but so much more… A red or green sour plum sauce made from the fruit of the tkemali tree. No one leaves the country without a bottle.

Pelamushi - Pelamushi is a Georgian delicacy made from grape juice extract, combined with a mixture of sugar and flour.