Despite its situation wedged snugly between other countries, Georgian is like no other language you are likely to see or hear. It belongs to its own ancient linguistic group with its own unique language and alphabet.

Georgian belongs to the Iberian-Caucasian group of languages and is the only language in that family that has its own ancient script. There are 3 dialects in the Georgian (Kartvelian) language (Georgian, Svan, and Mengrelo-Laz dialects).

The Georgian alphabet is one of about 46 different alphabets used in the world. It consists of 33 symbols including 5 vowels and 28 consonants. It doesn't have upper and lower cases. The shape of the letters is unique but their arrangement suggests influence from Indo-European languages. Many scientists believe that Georgian alphabet was derived from one of the Semitic alphabets around 6th – 5th century BC.

The alphabet has been modernized during centuries, but keeps the original roots and a lovely elegance - though it can be hard to learn when so many of the symbols look the same! However, even without understanding it, Georgian writing is beautiful with its myriad of theatrical swirls, flourishes and rounded curves.

The evolution of Georgian into a written language is considered to be a result of the country's adoption of Christianity in the mid-4th century. A mosaic inscription in the Judean desert in Palestine is known as the oldest Georgian inscription ever found, dating back to the 433 AD.

Bolnisi Sioni Church, situated south of Tbilisi, also has one of the oldest (493 AD) inscriptions in Georgian while the oldest manuscript (864 AD) is kept in St. Catherine’s Monastery on the Sinai Peninsula. 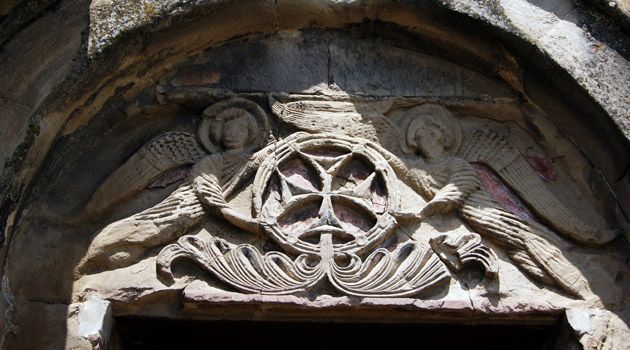 Beginning with the 5th century to the present-day, thousands of original literary works have been written in the Georgian national alphabet and preserved. The oldest known work of literature, "The Martirdom of Shushanik" was written in 476 – 483 AD by Iakob Tsurtaveli but it was "The Knight in the Panther Skin" created by Shota Rustaveli at the end of the 12th century that became the most famous work in Georgian literature. This poem has been translated into many languages of the world.

By the early 17th century, the Catholic and Georgian missionaries in Rome helped introduce printed books to Georgia and the first Georgian printing press was operating in Tbilisi by 1709.

In the 19th and 20th centuries, European scholars have become increasingly interested in studying Georgian literature as it has come to be acknowledged as a deeply significant part of European civilization.