This improbably beautiful country has a diverse topographical makeup. Subtropical marshes, semi deserts, alpine meadows and colossal snow-covered peaks can all be found within a hundred kilometers of each other, offering visitors hauntingly beautiful landscapes from the mountains to the sea. 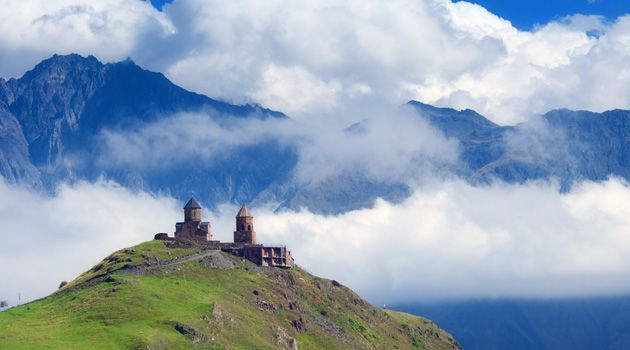 Georgia is situated on a mountainous tongue of land that licks the Caspian and Black Seas, wedged between the Caucasus Mountains to the north and the Lesser Caucasus to the south. Georgia's highest point is Mt. Shkhara at 5193m. Two other peaks rise above 5000m and 10 Georgian mountains are more than 4000m high and covered with snow and ice all year round.

The mountains moderate the local climate by serving as a barrier against cold air from the north. They divide the country into two contrasting climatic zones: Western and Eastern Georgia. On the western Black Sea coast the climate is notably humid and warm. Even in midwinter, the average temperature is 5°C (41°F) while the average summer temperature along the coast is 22°C (72°F). The plains region to the east, blocked from the sea by the Suram Mountains, is more continental in climate with slightly hotter summers and cooler winters.

There are few lakes in Georgia but they are glittering jewels, many nestled high in the mountains, the largest being Lake Paravani (37km2), and Lake Paliastomi (17.3km2). Paliastomi is an open saltwater lagoon. Boat trips can be arranged to experience the astonishing lake shore scenery. Rare birds can be seen winking amongst the peatland vegetation. Lake Ritsa, located in the Caucasus Mountains is the nation's deepest lake, at 116 meters (382 feet). Georgia has about 25,000 rivers draining either into the Black Sea to the west or through Azerbaijan to the Caspian Sea. The Mtkvari River is the largest, flowing 1,500km from its source in Turkey, and winding through Tbilisi before finally entering the Caspian Sea.

The Rioni River is the main river in Western Georgia. In Georgia's Soviet period, engineers reformed the lowlands around the Rioni River into prime agricultural land by straightening much of the river and building an extensive network of canals.

Six countries share the coast of the Black Sea, one of the largest inland water basins in the world. Georgia's 310km of coastline forms a window to the West and an important strategic, ecological, agricultural and tourist centre for the country.

Georgia is rich with incredible cave systems and limestone pillars as well as the renowned underground mineral waters that bubble up around the country. Krubera cave, at the edge of the Western Caucasus, is the deepest known cave in the world having been measured at more than 2000m deep.