Georgia's complex history and location at an age-old Eurasian crossroads has resulted in an eclectic display of architecture and art. It was influenced during antiquity by Mesopotamian, Anatolian, Greek, Persian, Roman and Byzantine traditions, then by religion when Christianity was adopted.

From the 19th century onwards, Georgian art and architecture has evolved more within the context of Europe and Russia as well as drawing from in its own deeply held roots.

Early Georgian art includes examples of beautiful and skilfully crafted gold and silver objects and jewellery dating to the 5th-4th centuries BC which can be seen in the National Museum.

Georgia also sports some of Europe's finest examples of medieval frescoes. The cave-hewn monastic complex of Davit Gareji dates as far back as the 6th century and housed a once flourishing fresco school.

Carpet weaving in the Caucasus also dates back to the Middle Ages as does the art of beautiful handcrafted cloisonne enamel. It is still a very popular form of ornamentation in Georgia and a stunning collection can be seen at the Museum of Fine Arts.

In the 17th and 18th centuries, Georgian art underwent a strong, orientalist makeover until the influences of Italy and Russia permeated in the late 18th century.

By the 20th century, Georgian art had developed its own style. Niko Pirosmani, perhaps the most famous Georgian artist, studied in Paris and became known for his primitivist style. His paintings are bright with childish lines conveying themes rooted in Georgian folk culture. 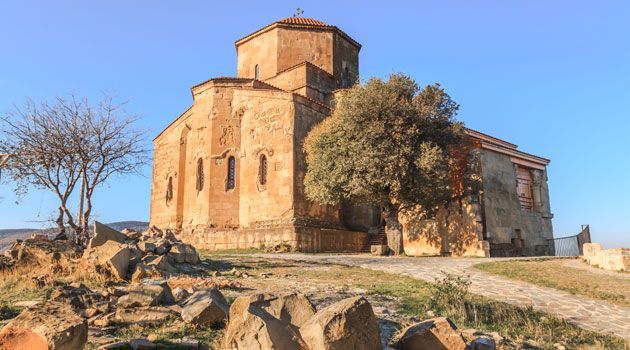 Georgia is an architect's dream. As with its art, Georgian architecture has been influenced by many civilizations, all visible in the country's castles, towers, churches and city streets.

Georgian architecture easily seduces its visitors and the Upper Svaneti region with its stunning mountain scenery and medieval type villages and fortifications, is no exception. The remote castle town of Shatili in Khevsureti is another popular destination to appreciate some the finest examples of medieval castle architecture.

Georgia's ancient cave city, Uplistsikhe, is also a treasured site with a fascinating history from the Iron Age. The carved city developed into one of the chief political and religious centres of pre-Christian Kartli with temples dedicated principally to the sun goddess. At its peak Uplistiskhe housed 20,000 people.

The arrival of Christianity was a critical influence on Georgian architecture with two major forms of ecclesiastical building developed here - the central domed structure and basilica. Sioni Church in Bolnisi and Jvari Monastery in Mtskheta are remarkable examples of early medieval church architecture in Georgia - you'll never forget stepping into these ancient sacred hilltop churches aglow with gold mosaics.

The country's rich collection of eclectic architecture is intensified in Georgia's capital, Tbilisi - from its iconic old town dotted with medieval churches and galleried houses to grand Art Nouveau buildings with their curved motifs and iron-wrought ornamentation, the austere structures left over from the Soviet Union, and now some eye catching futuristic designs modernising the skyline.